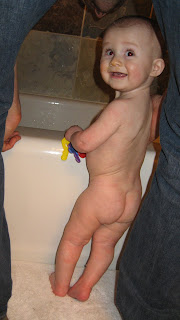 Merritt continues to develop at light speed! He has, for a while, mimicked us when we clap, but just yesterday he learned how to make noise with his hands while clapping....we did alot of clapping yesterday....! He continues on his mission to skip crawling altogether and go straight to walking by standing at any chance that he gets. He may not be able to go from laying to sitting on his own, but all he needs is a hand to grab, and he's on the move to sitting and then standing. He loves to stand while holding onto: his crib, the bathtub, the coffee table, hands, chairs, window sills, Max, Maya, the couch, cabinet doors...anything that allows him to grab and balance. He used to be so wobbly when he was standing, but now he stands only holding on with one hand and can shift his balance from one foot to the other while taking an unsteady step. We (by we I mean Renee) lowered his crib today because when he stood in it he began to notice objects on the ground and was able to lean out far enough to fall out!

I (Mark) just got back last week from skiing for five days in Montana at Whitefish Mountain resort. I went with nine other people from work and had a blast. We took the train from Bellingham to Whitefish which was an overnight, 13 hour trip, in what is purported and advertised to be a "sleeping" car. When we got on the train and I went to my "bed" it turned out to be nowhere near as big as the online pictures made it look. But to make up for that it did have a "closet" that may have held two or three sheets of paper at the most, but certainly no clothes, and definitely not the winter ski jackets that we were wearing. I shared the room with one other guy and to accommodate for two beds, what looked like the overhead luggage bin on an airplane, folded down into a "bed" that was six feet off the ground and had about 18 inches of clearance to the ceiling. But in the interest of safety, they provided a cargo net to hook to the drop down bed and ceiling so I wouldn't fall out. Not having fallen out of bed for a few years, I scoffed at this item until I was awoken (about a dozen times) in the middle of the night by the sensation that I was being flung across the room only to grab the side of the bed and haul myself back in moments before I tumbled to the ground. I didn't scoff after that. As it turns out, riding on rails isn't as smooth as I thought it would be. All that was forgotten, though...sort of... when I tasted the complimentary (paid for by my ticket) dinner and breakfast that were prepared. They know how to make good food on the train!

We skied every day and the snow conditions improved every day because of the couple of inches that fell every night. Everyone skied or snowboarded at relatively the same skill level and we all explored the mountain together, leaving no run untried. You might think that keeping ten firefighters armed with two way radios and cell phones together would be a simple task, but I'm here to tell you it's not. We lost people in the trees, on the lifts, at the bathrooms, and especially at lunch. It seems that the draw of food and drink was too much to overcome and some never made it back to the hill after eating and drinking. But we came home with everyone and all had a good time! It was another successful trip.
Posted by The Brennan's at 12:26 PM 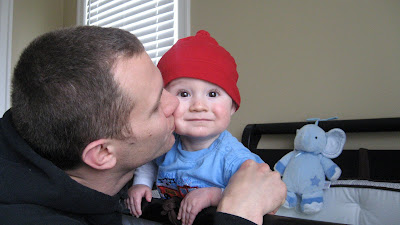 This picture was taken on the eve of Mark's departure. It almost looks as if Merritt knows. We are getting really excited though because Mark returns today. We are picking him up from the train station this afternoon!
Posted by The Brennan's at 7:31 AM

Merritt with one of his favorite babysitters 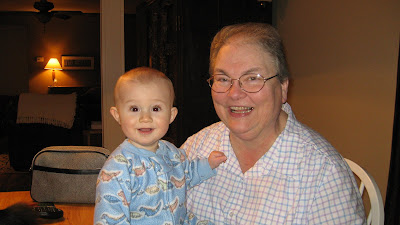 This is out good freind Dorothy. She only lives a couple blocks away and is definately a Godsend! She watches Merritt while we work and for those shorter times when we "play." Merritt loves to talk to her and giggle at her silly faces. As you can see by the photo, he loves her very much.
Posted by The Brennan's at 7:28 AM

I caught him red handed! 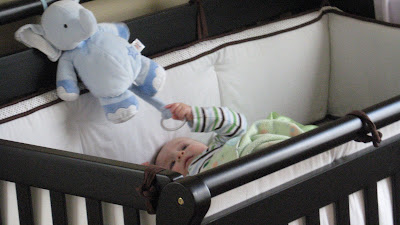 MY CHILD IS BRILLIANT! Or so I'm going to think... Mark isn't home, Merritt was in bed and I was in the den watching a movie. All of a sudden I heard music. As I slowly wandered through the house listening, I realized that it was coming from Merritt's room. We have a blue elephant that my mom bought for him hanging on the inside of the crib. It has a pull string on it. If you pull it, it plays about 20 second of "Rock a by Baby." I watched him carefully move the elephant's feet out of the way with one hand and grab the drawstring with the other (so coordinated and intentional). Then I watched him do it over and over and over....the music is still going...it's been about 15 minutes.. will he ever stop pulling the drawstring and go to bed?!?!
Posted by The Brennan's at 7:57 PM

Sign up to receive an email when we update!